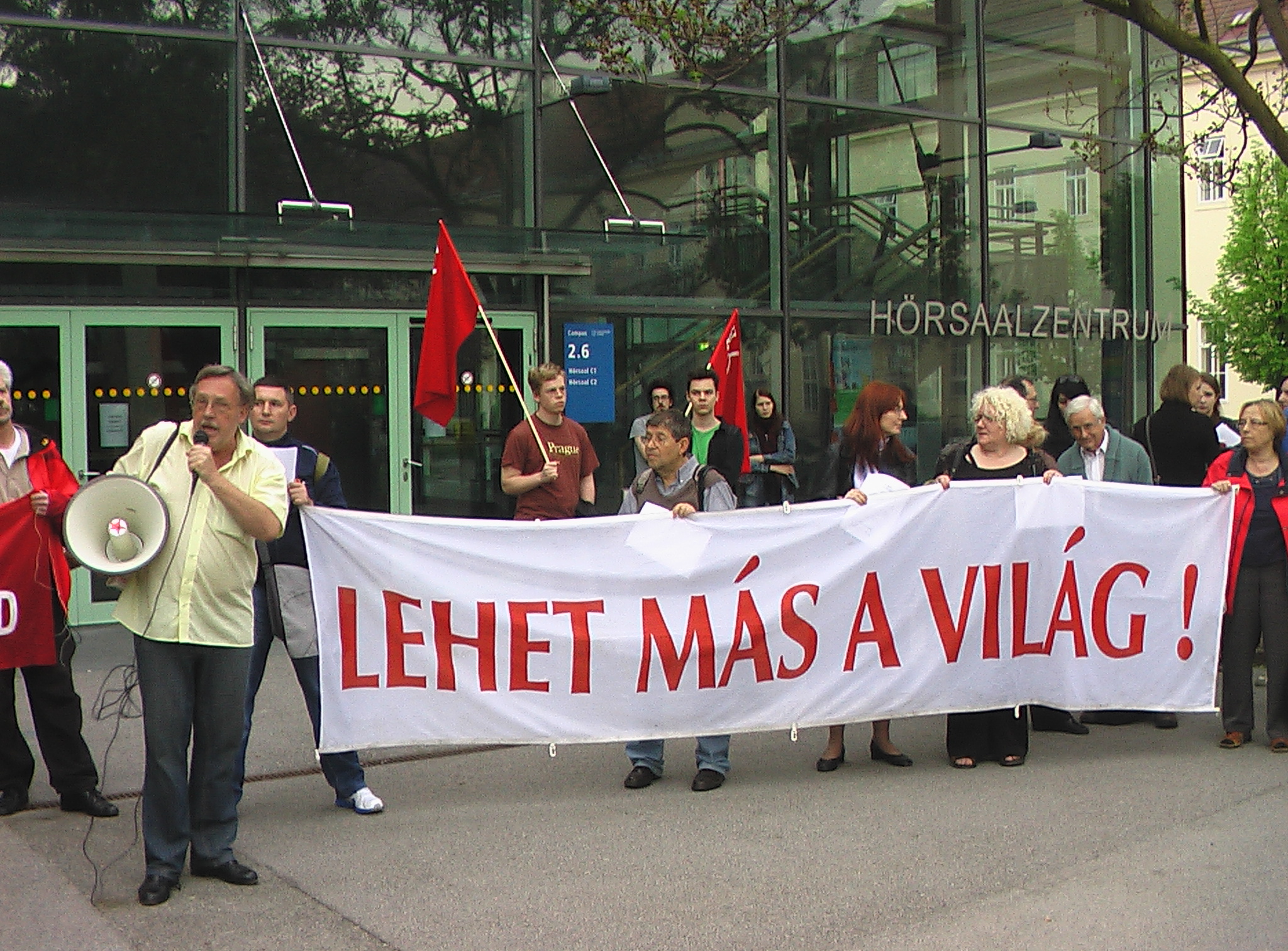 From May 2nd to 5th, 2013 the undersigned participants from over thirty Community based Social organisations established in 12 European countries celebrated a 3 days Social and Environmental Forum based on the principles of the Charter of Porto Alegre and following a call of the European Social Forum. As a result of the discussions and deliberations we arrived at the following conclusions:

Under the rule of neoliberal capitalism in crisis, the population of the Central and Eastern European countries has been suffering heavy losses in their life conditions, economy, culture, society, and our environment has been seriously damaged. This is the result of the neoliberal policies of the ruling parties.

Industry, once the engine of the economy, has been downsized, even most of the branches that could be competitive actors in the Western markets. The Central- and Eastern European countries have become the exploited periphery of the developed capitalist countries. During the transition years, even the up-to-date technical and economic co-operations of our countries were cut off. In the wake of the crisis, dangerous far right and fascist political forces have been reviving and strengthening.

We therefore declare our conviction that the deep structural crisis of capitalism, which produced the most diverse problems in our region and above all a considerable impoverishment of the living standards of our people can only be solved by surpassing capitalism and creating a new, community-based society. Therefore, we support the anti-capitalist declaration of the General Assembly of the World Social Forum Movements accepted on March 29th, 2013 in Tunis and we welcome the latest endeavours of the Latin-American Left towards a “good life” (buen vivir) which means that development and social justice are not anymore in contradiction. At the same time, we are aware of the fact that the socialist-like experiments of the past have had several weaknesses and mistakes – some of which originated in the historical situation of under-development and military conflicts.

In five panel discussions and a series of seminars we came to the following conclusions:

On environment:
In order to promote a just transition for all we have to take immediate action to stop the ongoing land grabbing in every country of the region. And in order to establish food sovereignity and to support local agricultural production it is absolutely necessary to decrease the food flow from the West, particularly from the Western EU countries.. To achieve a more sustainable lifestyle it is necessary to reduce unnecessary transports worldwide, in order to give a chance to local producers as well as to the preference of public transports over individual ones.

All natural resources should be controlled by the people!

On far rightwing extremism and populism:
Recalling the times after World War I we consider that the rise of far rightwing extremism is the most important serious threat for the transition to democracy. Given the fact that the disastrous situation for the economy of the great majority of the people in Central- and Eastern Europe is a consequence of the neoliberal policies which has been established right after the “turn” from the so calles “really existing socialism” to capitalism we propose a twofold strategy:

Taking direct action against fascist organisations wherever thy appear in public;
Develop in a credible way an economic and social program which contemplates amongst others a guaranteed minimum revenue, and to show our spirit of solidarity with the victims of the crises wherever we can.

On women and culture:
The situation of women became worse: they lost self-determination on their bodies and lives. Women in Eastern Europe are among those who mostly have become victims of prostitution, domestic violence and human trafficking. The governments and the EU are obliged to stop this considering the value of being human ratified in the UNO convention of 1946. We want pblic policies to abolish prostitution and all forms of violence.

We are in favour of New Values where the human being is the main goal of an internationalist humanistic culture to counteract the ongoing market driven mass cultures. This can be achieved only by increasing the importance of a community based culture in our own struggles and in the societies at large, counteracting the ongoing clericalisation of culture on the one hand and the market oriented mass events on the other.

On economy:
Following the analyses of the theory of dependence which has been developed thirty years ago for the relation between the North and the Global South we are in favour to create a regional alternative to the EURO taking as a model the example of ALBA (Alianza Bolivariana de las Americas) in Latin America which uses its own currency for international transactions. Along with this we have to intensify our struggle against privatisation of health care, education, transport and other common goods, creating a system of financing through a progressive taxation of capital transfers and of the income of those who have benefited and are still benefiting of the unequal distribution of wealth in our countries.

On alternatives to precarity and unemployment:
It has been accepted to support the ongoing European Citizen´s Initiative for a universal Basic Income. Together with this we have to develop a regional network of the victims of the crises in two forms:
The creation of “Parlaments (Assemblies) of the Unemployed” following the example of those which already exist in the Eastern parts of Germany.
Promoting a New Tradeunionism where the workers organize themselves according to branches including those who have precarious jobs in order to counteract the Tradeunionism of the big corporations.

Considering themselves as part of an ongoing political process which should involve all members of the civil society the participants of the 1st Central and Eastern European Social and Environmental Social Forum decided:
to prepare from now on the Second Central and Eastern European Social and Environmental Social Forum in a Central- or Eastern European countryin order to evaluate the achievements of the First one and to promote further action;
in the meantime intensify the information flow between the CSOs participating in this process by informing every two months about the activities, events and the progress made with regard to the established strategic goals.
Consider the construction of an international radio-network for the poor and the sharing of contacts between the Western and Eastern CSOs as an immediate task.
We send our warm greetings to the Subversive Forum presently held in Zagreb, Croatia and call for a Europe wide mobilization for the “Alter Summit” which is going to take place in Athens on the 8th and 9th of June 2013.
Expressing our solidarity with the Refugee camps in Austria and other countries and with all the peoples of the world who are living under even more hopeless conditions we express our profound gratitude to the organizers and supporters of this historic event.

Vienna, May 5th 2013
The participants of the
First Central and Eastern European Social and Environmental Forum