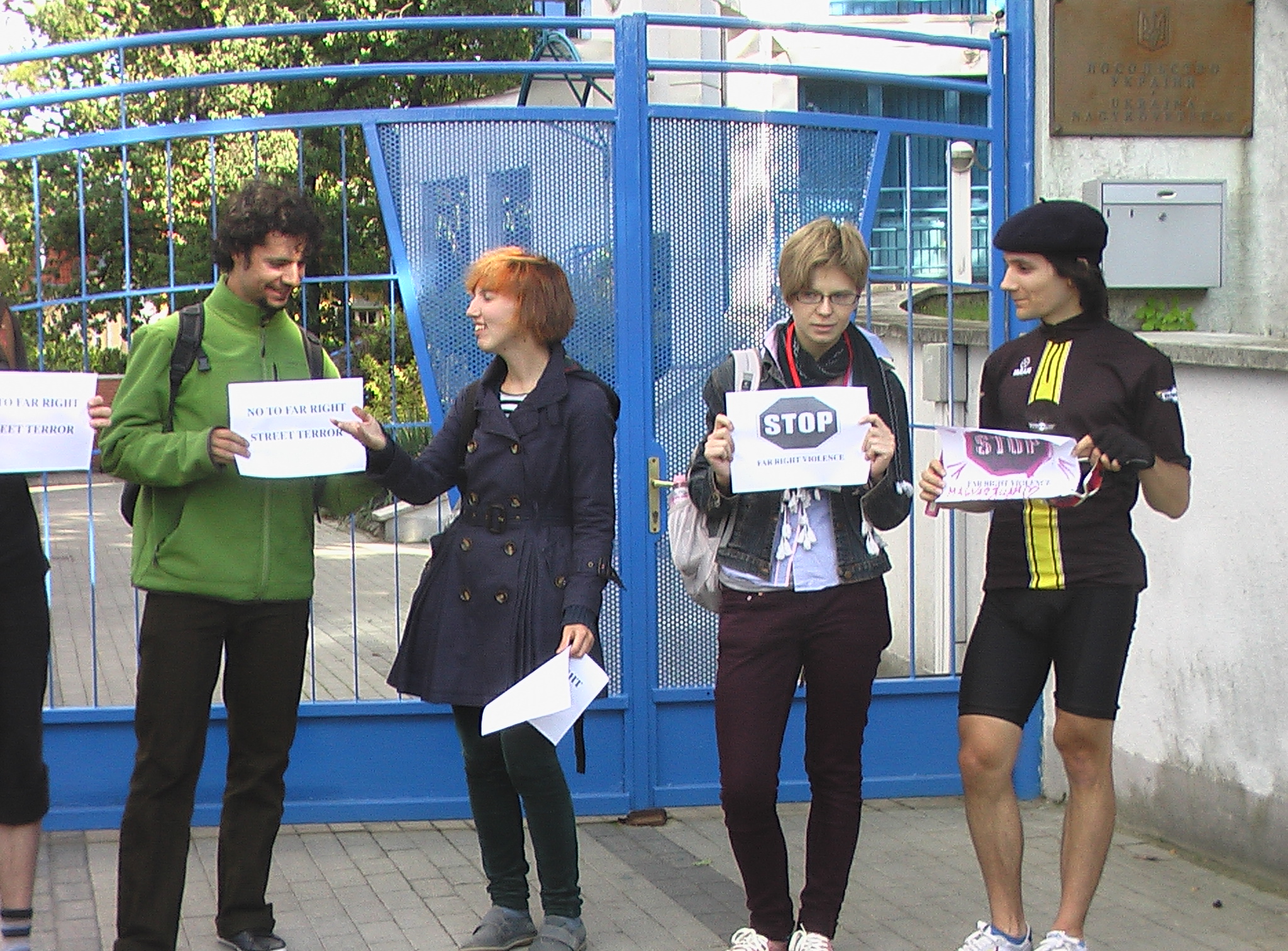 Venue: Budapest, in front of the Ukranian Embassy
Date and time: 19th September 2013. From 16:00 –17:00 hours
Participants: Members of ATTAC Hungary, and Students of the Central European University (CEU) – alltogether 7 persons.

Since the 2012 elections the amount of street violence augmented rapidly. Totally more than a dozen attacks have happened until today but only a few of them received media attention. The police is constantly turning a blind eye on these cases.
„The far right is the most active political force in Ukraine at this moment. Almost 20 percent of all Ukrainian protest events fixed by our systematic monitoring in 2012 took place with reported participation of various radical right organizations, among them most predominantly, the Svoboda party….”said Volodymyr Ischchenko, the head of the Social ProtestsResearch Department of the Centre for Society Research. (Please see more details: http://www.searchlightmagazine.com/news/international-news/the-rise-of-right-wing-violence-in-ukraine )
On 11th September 2013 a left-wing activist of the student union „Direct Action” was attacked by a fascist paramilitary group in the city centre and suffered brain concussion and partial memory loss. This was the second attack of this kind in a month. (Please see more details: http://direct-action.org.ua/1660 )

Program of the Budapest demonstration was as follows:

From 15:30 h: Preparation, gathering in front of the Ukranian Embassy

From 16:00 h till 16:15 h: small banners and handouts distributed, photo and video recording about the demonstration. Dafna Rachok, CEU student explained the situation with far right violence in Ukraine.

From 16:15 h till 16:30 h-ig Readout of Political statement condemning the rise of far-right violence in Ukraine.

16:35 h Handing over a petition to the Ukranian Embassy.

Evaluation of the demo

The demo was organized in short notice and was of symbolic character with few participants. The main aim of this protest was to express our solidarity with the Ukranian antifascists and demading the Ukranian authorities to stop far-right violence and to ban the Ukranian fascist paramilitary groups.