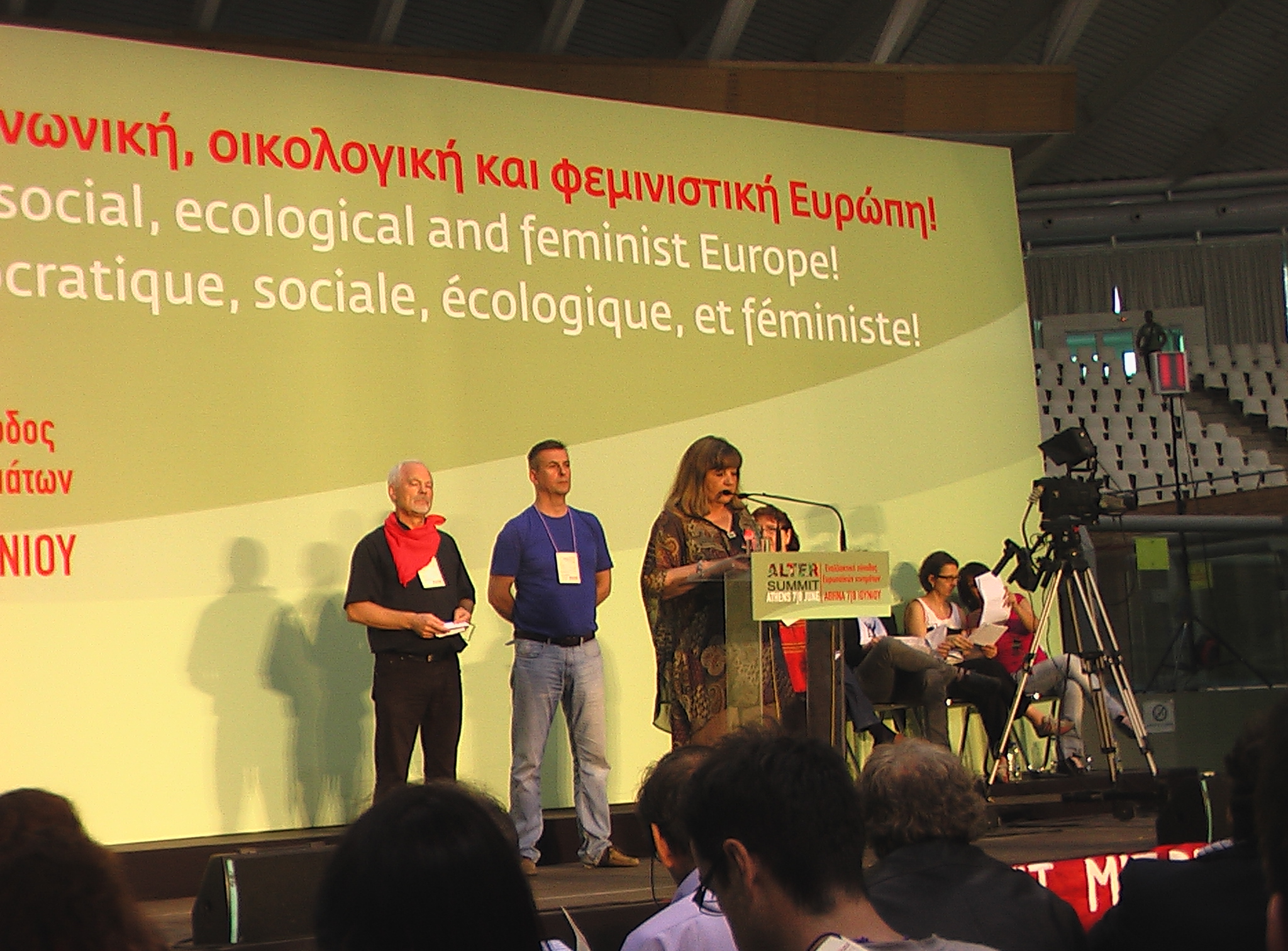 Evaluation of Altersummit and PS2 tasks
1.) The Altersummit in Athens was not a very successful event and it has remained extremely isolated. Approximately one thousand people were present (half as much as the participants at the Firenze 10 +10 event) in the Velodrome of the Athens Olympic site. Greek organizers originally expected five thousand participants, but even at the Saturday’s big demo only about two-three thousand people showed up. It is quite ununderstandable why – in particular – the Greeks stayed away from the Altersummit in such a big number, which phenomenon should be thoroughly analyzed. One of the reasons for the low Greek participation might have been the fragmentation of the Left, so the political forces were unable to act together. This seems to be the most plausible explanation, because 3 separete demonstrations were organized at the same time and many Greeks considered the Altersummit as Syriza promotion action. At the end of our march/rally, the “Gay Parade” began, when the parade participants were marching through in between the sidelined rows of Altersummit protestors. Nearly 200 organizations from 20 countries, including professional organizations (e.g. CGT, IG Metall, Solidaire, GSEE, ADEDY), feminists, civil society organizations (large numbers of French ATTAC), left-wing parties (NPD, Die Linke, Syriza) party foundation (e.g. Rosa Luxemburg), think tanks close to the European Left Party (e.g. Transform-network members). Apart from few exceptions no news were given about the event in abroad, but in many countries the whole media remained silent. Altersummit fits into the declining trend of the European Social Forums. There is absolutely no evidence of “what will be the next step”. To continue the Altersummit process, there is neither money nor strong public support from below. The only hope is the international anti-fascist conference to be held in 2014 in Budapest, if the financial and other support from the „Altersummit leadership” will be provided. In this matter, Walter Baier (Transform-Austria) will soon visit to Budapest.

2.) Key public event of the Altersummit on Friday evening was a very tiring 3.5 hours long introduction and the adoption of the so called “People’s Manifesto” (Manifesto) in a plenary meeting, attended by Syriza’s Tsipras himself as well. The Manifesto formulated urgent demands against the austerity, the cuts attacking bourgeois democracy, social and labor rights, as well as issues of poverty and women. One of the about two dozen speakers was Karoly Gyorgy (representing Hungarian Trade Union Confederation – MSZOSZ), who was repeating the essentially well-known reformist demands (fair and decent wage, job creation, etc).

3.) On Saturday at the thematic discussions (Assemblies) 14 topics were analyzed: fascism, debt crisis, peace, poverty, public services, democracy, labor rights, housing, health, education, migration, environment, euro-zone, banks, solidarity actions. The most important meeting for the Central and Eastern European participants was the Assembly on far right, in which about 120 people took part. Several members of the Prague Spring 2 Network took the floor, like Hermann Dworczak, Jan Kavan, Mirek Prokes, Matyas Benyik, Nadia Shevchenko and Aleh Novikau. At the end of the meeting we have adopted a joint declaration on the advance of far-right all over Europe. Concrete results: a.) study conference on the far right in Paris next automn, b.) a big meeting against the far right and neo Nazis next year in Budapest, c.) rising interest to work together with PS2 Network. According to Mirek Prokes, besides our assembly on far right, the best debates/side actions were organized by GUE/NGL with several MEPs and top economists.

4.) The People’s Manifesto against the austerity policies are essentially only social-democratic alternatives, requiring only “pay rise” or “adequate minimum wage” rather than radicalism. The eurozone, in particular calls for the restoration of the core countries’ „welfare systems”, in short the Manifesto represents the labor aristocracy program and it narrows Europe to the European Union, it is afraid of the disruption of the EU and it demands to place the EU institutions under (bourgeois) democratic control, but of course, it is concerned about the growing inequality and the weakening of social cohesion. It is an absurd idea that the EU can be a potential guarantor of “protecting the public interest and social needs are met,” because the EU – with the national governments’ complicit support – is representing the interests of the ruling elite now and in the future, too. This is well illustrated by the brutal social cuts introduced and the accelerated deterioration of Greece, Portugal, Spain and Italy. Situation in the countries of Central and Eastern Europe are no less favorable than in those countries mentioned before and CEE countries have no chance of “Catching up”. The debt rescheduling and auditing are not solutions, within the existing system there seems no solution.

What are we to do in the coming months? Concrete proposals:

1. We need to make permanent contact with the people interested in closer cooperation. We have to get the list of participants of the Assembly on far right from Yannis Almpanis and/or Walter Baier. Deadline: as soon as possible, but latest until end June 2013. Responsible persons: M. Benyik, H. Dworczak.

3. We need to issue as PS2 a solidarity statement with the Tuskish revolt. Deadline: 25th June 2013. Draft to be formulated by Tord Björk, deadline: 23rd June 2013.

5. We need to convince our comrades to participate in our regular weekly Skype chats and make concrete proposals for common actions, share reports/videos/short analysis/brief information on main national issues. Deadline: continuous, Responsible: 1 or 2 comrades to be nominated per each country.

6. We need to mobilize for the Prague Conference „Reclaim Europe for Solidarity” against hate speech organized by UNITED between 22-27 October 2013. Responsible: M. Prokes. Deadline: 15th July 2013.