DRAFT CONCEPT for a broad International Antifascist Conference in Budapest in 2014. 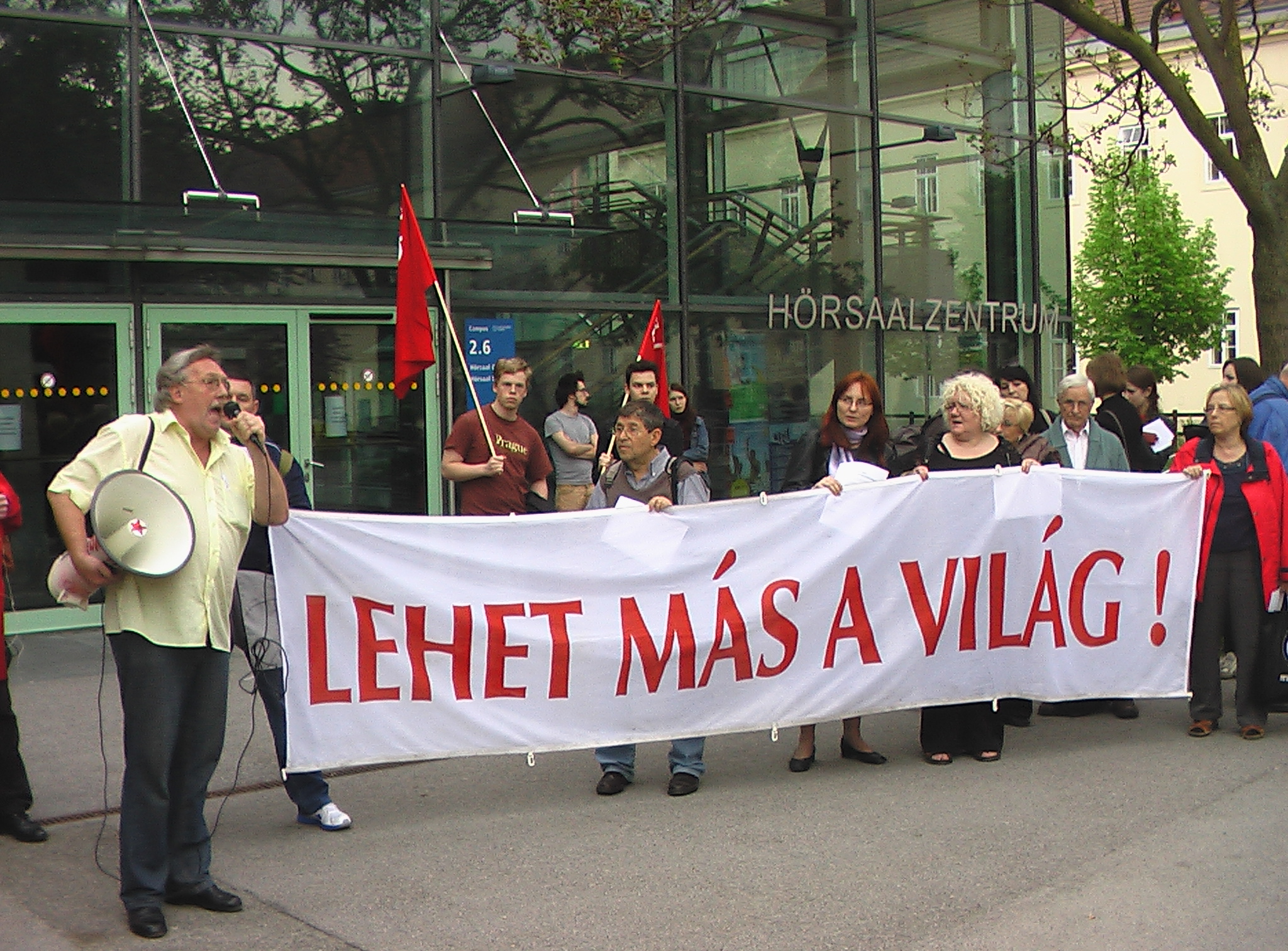 DRAFT CONCEPT
for a broad International Antifascist Conference in Budapest in 2014.

In the framework of the European Social Forum (ESF) about 100 participants from 19 European countries representing a great variety of social movements, human rights and ecological organisations took part in a conference on the alternatives to right wing extremism (RWE) in a time of social and ecological crisis. The participants came to the conclusion that „it is neoliberal global capitalism and neo-conservatism which have incremented and enhanced conditions for the rise of both populist right wing parties and organisations”.
Please see in details http://www.praguespring2.net/?p=36#more-36

2.) In Kiev from 11th to 13th November 2011 fourteen Western, Central and Eastern European countries alltogether with about 100 participants held a conference entitled „Alternatives to the rise of far right in a time of social and ecological crisis”. With regard to the ongoing crises, there was a common agreement that RWE and populism are only symptoms and „we have to overcome capitalism”.
(Please visit http://www.praguespring2.net/?cat=8 )

3.) Firenze 10+10 between 8th and 11th November 2012. More than four thousand participants, 300 networks and organisations from 28 countries held discussions at Fortezza da Basso in Florence. Participants have called for an European wide mobilization to support the fights against the crisis. (http://www.firenze1010.eu/index.php/alliances/interconnection-and-common-action/225-firenze-10-10-call-for-action )

4.) Central (and East) European Social and Environmental Forum (CESEF) in Vienna from 2nd to 5th May 2013 under the title „Revolts in the periphery? Fight against capitalist globalization and destruction of nature.”

The first CESEF was considered as a part of the World Social Forum (WSF) process. Despite the low number of participants (about 130 people) its importance lay in the fact that the common problems of the CEE region – which have been marginalized in the ESF – had been highlighted. The consequences of the semi-peripheral (or peripheral) situation of CEE were deeply analyzed and a final declaration was accepted. (Please see http://www.sozialforum-asf.at/index.php/dokumentation/356-common-declaration-of-the-central-and-eastern-european-social-and-environmental-forum ). The main outcome of this event was that the second CESEF would be held in one of the CEE countries in 2014.

5.) Altersummit (AS) in Athens from 7th to 9th June 2013. Approximately 1,000 people from across Europe came to the Olympia area of Northern Athens to discuss in different „assemblies” about themes including social rights, ecology, education, migrants, health, housing, fascism, peace, banks-debt and solidarity. The main goals of AS were as follows: a.) to end debt slavery, b.) to roll back austerity, c.) to eradicate poverty and precariousness, d.) to make banks serve the public interest.

In the centre of the AS stood its so-called “People’s Manifesto”, which outlines
“urgent common priorities for a democratic, social, ecological and feminist Europe”
shared by the participating organizations. This document is essentially the outline of
an alternative austerity policy, hidden under formless proposals for “wage increases” or an “adequate minimum wage”.

One of the most successful AS assemblies were held on 8th June on far right and neonazism with about 150 participants. At the end of this assembly the participants unanimously accepted a proposal to hold a broad, pluralistic European conference on RWE in Budapest in 2014. 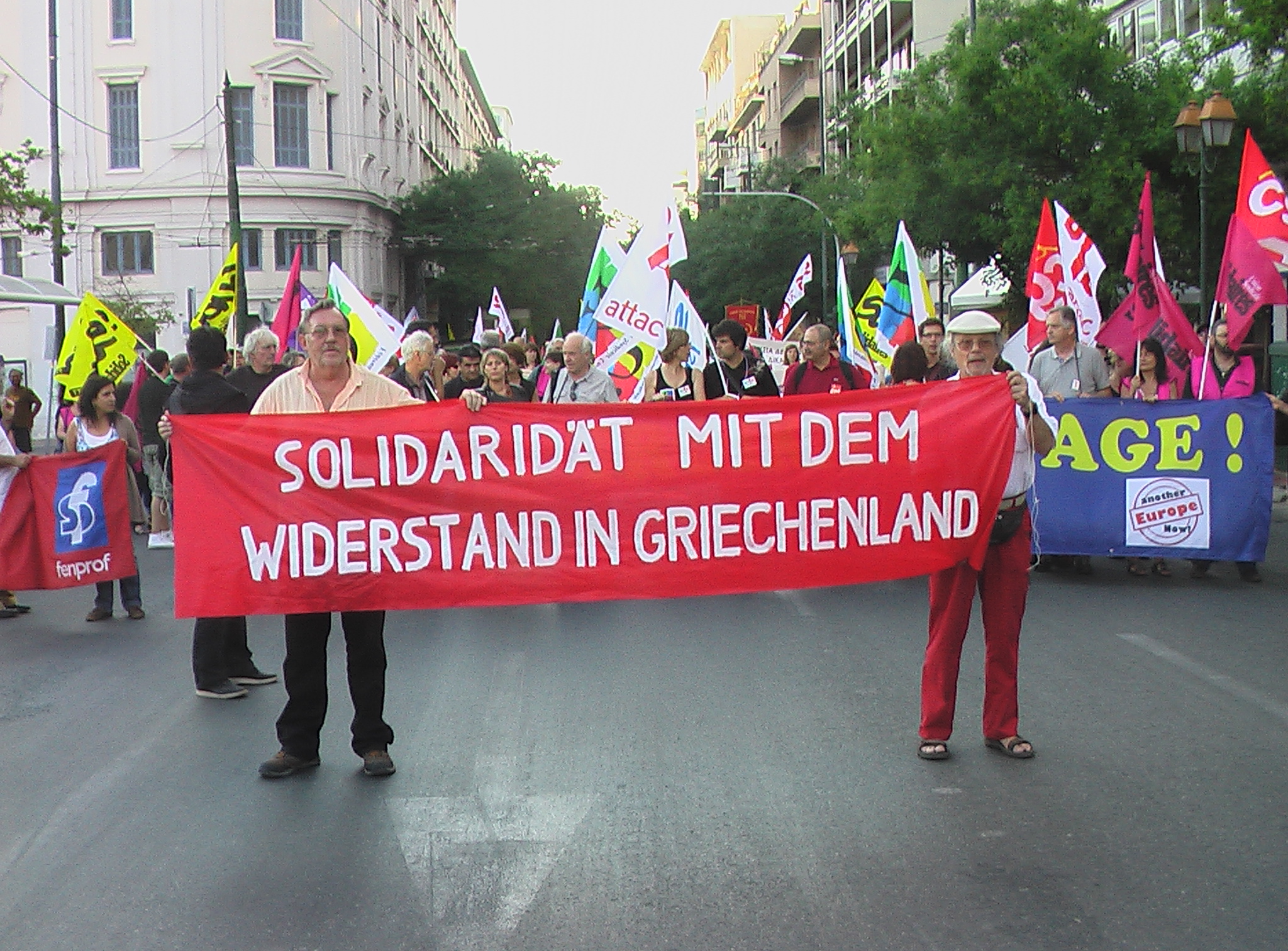 Reasons to hold urgently an European wide conference on RWE

What we see today is the open outbreak of crisis of capitalism and civilisation with economic, social, ecological and political dimensions. Those in power have neither the ability nor the interest to solve these crises. Either neoliberalism or neokeynesianism does not give a way out of the crises. In the case of neoliberalism this is obvious. But also neokeynesiasm can make only small “corrections” without dealing with the basic structures of the capitalist societies of endless competition and never ending growth of use of natural commons on a finite planet which led to the present crises.

The result of these general trends is the ongoing and deepening of the multi-dimensional crisis. And as a consequence, many fundamental human, democratic, political and social rights are violated and the strong advance of new forms of racism, RWE and right-wing-populism are on the rise. This is a symptom of trends sweeping in whole Europe.

In France, Switzerland, and Austria, right-wing parties known for racist and nationalist platforms have gained ground. In Germany the immense danger and criminal energy of the neo-nazi underground was recently revealed trough their murderous attacks against migrants as well as the entanglement of their networks with sectors of the state aparatus.

The nation-state arrangements of the new power elite of CEE are the more extreme: the more the idea and the praxis of the independent nation state are linked with the fascist, anticommunist tradition, the more they are nationalist-fascist. In this respect Ukraine, the Baltic region, Hungary and Croatia are the most frightening, i.e. where the Nazi collaborators played an important role during the second World War (e.g. in Latvia – the glorification of Ulmani’s regime).

The electoral rise of Golden Dawn in Greece is extremely worrying. Golden Dawn is a nazi gang which is implicated in tenths of criminal attacks to immigrants and refugees. Greek government still tolerates Golden Dawn and its terror.

The Nordic countries are not exceptions at all, where a new kind of racism against the „lazy” Southern Europeans is emerging.

The most disturbing fact is that we also experience the rise of forces which are openly neonazi and which in some cases are linked with mass movements of an overtly racist, violent and anti-Semitic character. They aim at the destroying of any kind of free unionising, political and cultural organisation of the working classes, the erasing of civic resistance and the doing away of any right of difference.

Influence and extremism of the Right differ from country to country. However the generalized application of draconic austrerity policies in Europe with devastating economic, social and cutural effects leading to the rise of the extreme right in its different types become a common characteristic in European societies. Their social, economic and political agenda converge on the revival of nationalism and hostility towards European integration and international solidarity. Indeed, austerity programs of the EU and the IMF and the authoritarian way in which they are implemented negate the bourgeois democratic rights achieved in the nation-states and the national dignity of the concerned countries. However nationalism has always proven as a trap.

The conclusion we have to draw is evident: to the extent that the rise of the extreme right and neonazism do not reperesent exceptions but general trends we have to cope with them as European problems. We therefore appreciate initiatives as the „Antifascist Manifesto” which calls for joint European initaitives in fighting against the far right in all its variants.
(Please see in details: http://antifascismeuropa.org/manifiesto/en ).

The rise of the extreme right reflects as well the still existing weakness and the lack of credibility of a democratic, social ecological and feminist alternative anchored in a European perspective as demonstrated in the AS People’s Manifesto.

That’s why the development of our movement is so important. Historical experience proves, defending the social, ecenomic, democratic, ecological etc. rights of the people represents the most effective instrument in fighting the extreme right. Reversely we call all trade unions, social, eclogical and feminist movement as well as all democratic forces to join in the fight against the extreme right as it represents a peril to democracy and freedom of political expression of all of them.

The fight against the extreme right and neonazism is at once social, political and cultural one. It embraces the repudiation of sexism, homophobia, anti-Semitism, anti-islamism and of any kind of fundamentalism trying to deprive human rights and the right of difference.

Why could BUDAPEST be the best choice for an International Antifascist Conference ?

1.) Because nowhere in Europe has a nascent fascist movement made greater inroads than in Hungary, where the far-right Jobbik party (Movement for Better Hungary) has staked a hold on the hearts, minds, and Facebook pages of Hungarian youth. The party won 17 percent of the Hungarian Parliament in 2010 and has only gained ground since. By today it has become the third most popular party, which mainly benefited from the public’s reaction to harsh criticism of Hungary in the Western media and the EU. The multi-dimensional crisis, the constantly dropping standard of living, the growing poverty has led to the establishment of the racist para-military Hungarian Guard and its new variants, too.
2.) Because Hungarian Prime Minister Viktor Orban has failed to establish a strict line between his centre-right Fidesz party and the far-right Jobbik, and he has been reluctant to take on its policies.

3.) Because violence against ethnic minorities is on the rise. Despite Orban’s insistence at the recent 2013 World Jewish Congress that his government is not anti-Semitic, and that he will not tolerate hate, his actions suggest otherwise.

4.) Because the fall of the so called „Communist” regimes in CEE left an ideological vacuum. A seething ideological mix came to the fore in many CEE countries, made up of anti-Semitic, anti-Roma and racist stereotypes, nationalist prejudices and elements such as militant anti-communism, revisionist ambitions and a vengeful fundamentalism.

5.) Because the advance of RWE is closely connected to the crises of CEE „new capitalism”. In this region under the banner of freedom and bourgeois democracy the neofascist political groups and parties are legally marching.

6.) Because Hungary is an easy access to Central and East Europeans, who were and still are quite marginalized in the European social forum/AS process.

7.) Because the Hungarian Social Forum organizers can provide suitable premises, high level expertise, knowledge for the International Antifascist Conference (AIC) if the financial conditions of the event are secured.